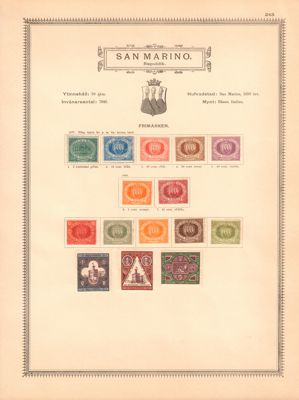 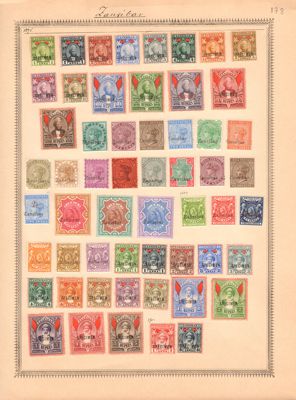 This worldwide collection, based on stamps received from the UPU with some additions, was sold at auction by AB Philea on 25 November 2017 in Stockholm.

The early part was housed in two large pre-printed albums published by Heinrich Lichtenstein, a prominent Swedish stamp dealer. The Foreword is dated November 1891 which corresponds to spaces being allocated for issues to mid 1891.

Later distributions, up to around 1903, are mounted either at the foot of pages, on the reverse, or on inserted blank pages.

Some earlier issues, not distributed by the UPU, have also been added to the collection. In some instances these may be reprints.

Stamps in the albums have been stuck down, for the most part only with the upper one third of the original gum. With care they can be removed without damage but the provenance would be lost. A significant feature of the collection is the extraordinary freshness of the colours.

As expected, for the British Colonies stamps issued from the date of membership of the UPU onwards are mostly overprinted SPECIMEN whilst those of the British Dominions and of ‘foreign’ countries are generally in normal unused condition.

Items currently available for sale are included within the relevant country lists in ‘specimen stamps for sale’.